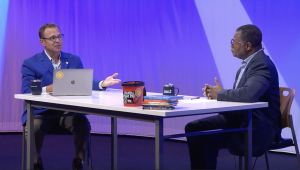 Minnesota Public Radio (MPR) found their President, Duchesne Drew, by way of some early talent scout who admired his savvy as a journalist – and also saw his talent as a leader. Duchesne (pronounced De-Shawn) was the speaker at the 92ndepisode of the Good Leadership Breakfast Series last Friday, September 17, 2021.

He shared how he grew up in New York and migrated to the Midwest for journalism school at Northwestern University in Chicago. He landed the job as President of MPR after several stimulating jobs as a journalist at the Star Tribune, an earlier run at MPR, and the Dallas Morning News.

Along the way, he emulated leaders who embraced an intensely personal style of leadership, anchored in a structured, repeatable method of maintaining alignment on teams. He shared three Success Habits identified by members of his executive team. Success Habits are something leaders have learned to repeat over and over in their leadership because it really works:

After hosting 92 speakers who share their Success Habits, the one reoccurring trend is that none of the habits they share are unheard of. They are common-sense practices. And yet, as an executive coach, I’m continually amazed at how common sense, is seldom common practice. If you are not using the Success Habits articulated by Duchesne Drew, why not try them today?

Watch the Breakfast. Listen to the Podcast.