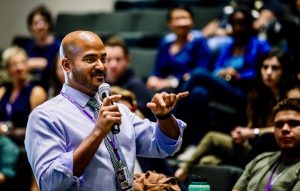 Alvin Abraham is a turn-around specialist and entrepreneur, working in the ancient and ever-changing field of education. Born in New York City to immigrant parents who left southern India, he grew up in suburban Houston, Texas. School was always important – emphasized as the pathway to prosperity. But after graduating from Texas A&M, his path was shaped by a two-year commitment to Teach for America (TFA). “The way I grew up, I didn’t realize so many people are affected by poverty. The book Savage Inequalities by Jonathan Kozol, and the mentors at TFA changed my life forever,” he explained. “Now my life’s mission is to level the playing field of society.”

Alvin’s first job out of college – a classroom in Houston, working for Teach for America.

Alvin is the speaker at the Masters Alliance Young Leaders episode of the Good Leadership Breakfast, on Friday, August 16, presented by TCF Bank. It’s the kick-off of the Fall Season – which will round out our 10th year of programming. Once a year, we deliberately focus the message “goodness pays” on young leaders to show how leading with goodness is the best path to building a good life.

Alvin speaks to young leaders with a strong voice. Like so many young people today, he has consistently thought about his future in 2-year increments. After two years with TFA, he got his Masters in about two years. And he successfully turned around many failing Houston elementary schools in that same amount of time with his leadership. “By age 27, I was already a Principal in Houston, in a school with a 1000 kids,” he shared. “We showed consistently good gains in academics, behavior, and community esteem. That’s where I got my reputation as a “turnaround” Principal.” 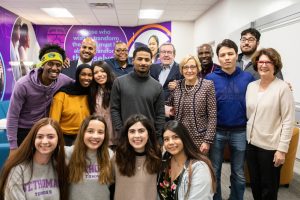 Then, out of the blue, he was recruited to move to Minnesota by KIPP – a national Charter School college preparatory organization. “I told them I would only come to the Minnesota cold for a “couple of years…” That lasted for a couple of years, before he was called to the ultimate entrepreneurial opportunity: to start the Dougherty Family College at the University of St. Thomas. It took a couple of years to turn the vision into an operational reality: a two-year associates degree college for students with the biggest challenges and the highest needs – where those students finish with little or no debt.

“Most of our students are 18-years-old, coming right out of high school with lives that are really difficult. 10-12% are homeless, they get kicked out of their homes for many reasons. Every single student has at least one job to make ends meet. Most contribute money to their family’s survival. Some are undocumented, worried and scared parents will get deported. And some have kids of their own. The more the college grows, the more of these problems we inherit.” 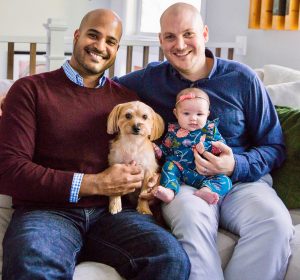 Alvin and his husband, Nick, in their first family photo taken in 2018, with daughter, Willa, and their dog, Jack.

The young leaders who will attend as guests at the breakfast on August 16, will likely assess their lives as posh and simple, compared to the story Alvin tells. They will hear a challenge to embrace the unexpected twists and turns in their life. And to be grateful. “In these students I truly see a source of goodness – they have courage and perseverance that we all can learn from. The best part of my life today, is that it’s great to be around people who are trying their best to dig in and get a degree…against a lot of odds.”

So, it’s no surprise to me that after making that “couple of years” promise to his Minnesota employer, Alvin now considers the Bold North his home. He met his husband here, and together they adopted a baby girl who is now a one-year-old. “Like our students, we are getting lots of advice from our families on how to raise our daughter. But we are doing it our own way,” he grinned.

If you want to meet Alvin Abraham, you can attend the Masters Alliance Young Leader breakfast, presented by TCF Bank. But you have to bring a young leader with you. Get your tickets here.