Good Leaders: What did you learn from the eclipse? 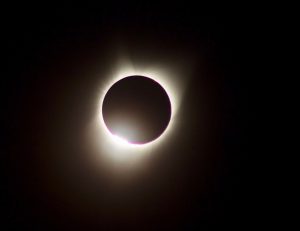 A friend captured this photo of the eclipse from his pilgrimage to eastern Missouri to be part of history.

Ok, so I’ll admit it – three weeks ago, I couldn’t care less about the eclipse. Perhaps I’m just not astronomically curious? My wife has a really cool app on her phone that charts the stars at night. I think that’s cool. But the idea of interrupting a perfectly good Monday to watch the moon block out the sun just wasn’t tickling my fancy. 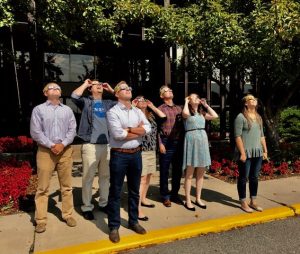 The executive team and family owners of Asmus Farm Supply convinced me to join them in gazing at the eclipse.

As “totality” approached, the people around me were starting to ask “Where are you going to watch the eclipse?” instead of “Are you going to look at the eclipse?” Alas, the reason I decided to engage was because a client asked me. A charming group of private business leaders were gathering at our office to discuss the vision and strategy for the future of their firm. When they showed up with these cool looking “Eclipser” glasses and asked to take a break around noon…how could I say, “No?”

In retrospect, as adults we find momentary evidence that we can slide into a cynical apathy – numb to some of life’s smallest wonders. What I discovered about myself when I engaged was a collective sense of oneness with people all across North America who were feeling as bewildered and as small as I was feeling.

Our first gaze, the sun was 90% visible. That was fun. Our second gaze, the sun was 60% visible and the skies were beginning to grey. That was fascinating. When the sun was only 20% visible, the temperature dropped and then it hit me: What we are seeing today was only visible this same way in 1918. That’s before my parents were born. The excitement made me think about the millions across the country who were looking at exactly the same thing I was looking at. Wow. 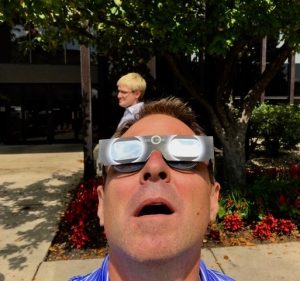 Silly me. One of our clients captured the exact moment when I realized how cool the cosmic spectacle was.

Suddenly, I couldn’t get enough information. And I heard fantastic stories from people I know who traveled time zones to get their special view:

A neuroscientist, Paul Camarata, who lives in Kansas City traveled to east of St. Louis, Missouri, with a colleague who flew in from Boston to see the eclipse. He called it, “…the coolest thing that will happen to me through the lens of a telescope in my lifetime.” He has the pictures to prove it.

A friend who traveled to Oregon said, “For one moment, everyone around us – I’m talking at least a thousand people – were cheering. In one shining moment of darkness, we were living 375 years of history. It was like a giant group hug!” 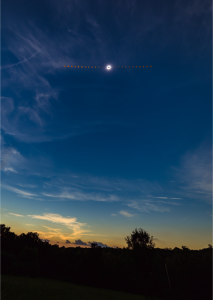 Another friend, Marc Miller, took a road trip to Wyoming with a buddy, stopping off at random small towns to play nine holes of golf to break up the drive. They played 5 courses in one day! He explained how the long drive was worth it: “The stars in the Wyoming sky just popped in the moments before totality. Then when it happened, the horses were banging the doors of the stable and the dogs began fighting. Even as I tell you this, the hair is standing up on my arms and I have chills just reliving the moment.”

Wow. Goodness appears in so many ways! The humility for me came in realizing that sometimes I’m shallow and aloof. The smart people took that day off months in advance – some got hotel rooms in the path three years ago. The silly (aloof) people like me had to be convinced to take one hour off work. What was I thinking?

Good leaders find wonder and humility in the most unexpected places. And they are willing to engage in seemingly irrelevant activities because that’s how we learn. 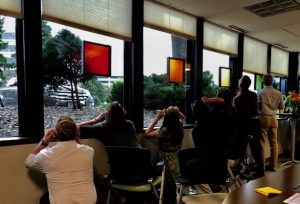 The Asmus team huddled near the window to gauge the progress as we worked on their vision and strategy for the future.

Please share with me: what did you learn from the eclipse?