Good Leaders: What do you celebrate on Sunday morning?

This past Sunday was the 40th anniversary celebration of CBS Sunday Morning – my favorite TV show. Jane Pauley is the host.

“This is my favorite TV show ever,” I heard myself say out loud last Sunday morning. What prompted the response was the Winton Marsalis trumpet fanfare opening to the CBS Sunday Morning program, and then the host Jane Pauley said, “Today is the 40th anniversary celebration of CBS Sunday Morning.” 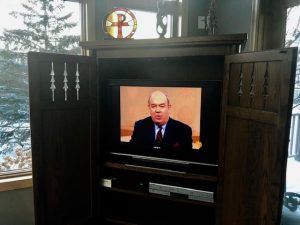 Charles Kuralt, opening the first episode in January of 1979.

I was so happy, that I tuned every TV in the house to this program…so I didn’t miss a thing.

At 55 years old, I’m still feeling very young. And yet, as I stayed glued to a continuous montage of stories, celebrities, and real people that have graced the Sunday Morning program, I felt nostalgic and older. When the program began in 1979 as the brainchild of Charles Kuralt, I was only 16 years old. Since my mom did church on Saturday nights, the CBS Sunday Morning program was in many ways our “church.”

Then, later in life, when my grandmother quit playing the organ in her church, one of our favorite topics for she and I to discuss was what she saw on the CBS Sunday Morning show. 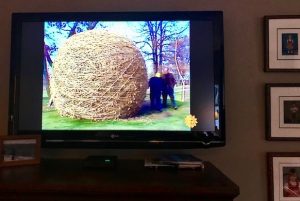 The show’s creator, Charles Kuralt, visited the world’s largest ball of string in Minnesota – many years ago.

The opening story that hooked me right away, was about the giant ball of string in Minnesota. I laughed out loud. Not the “LOL” kind…the real thing.

So, that explains why just two days ago, on a Sunday morning, I sat riveted to the TV for 90 minutes – with only the dog and the cat as my companions. I celebrated my vivid memories of TV goodness: stories of art, music, nature, the human spirit, and things that are right with the world. It was a great start to my day – that also included a trip to church, and a flight to Santa Barbara, California.

But not before I sat in silence to watch the 90-second nature scene at the end of the show: just a still camera, with an open microphone, and no talking. What a gift. Stimulating silence. 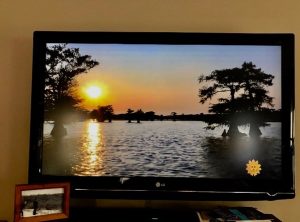 The final nature scene, broadcast with only nature’s soundtrack, is a stroke of brilliance that endures since the very first show.

If I could pick one expression that mirrors what I’m trying to do with our mission of “spreading goodness” – it’s the CBS Sunday Morning show. Because it’s the perfect way to start a good week, with pure goodness.

Good leaders find ways to start their week with a burst of positivity and possibility. And they celebrate what’s working in the world, because that’s how goodness pays.

Please share with me: What do you celebrate on Sunday morning?