Good Leaders: What fears hold you back? 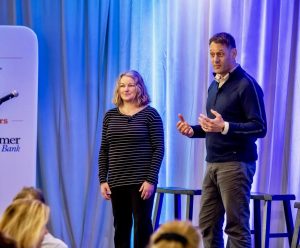 Erik Gabrielson explained his fear in the quest to help his son Kieran survive CDH at birth. His wife Moira – Kieran’s mom – shared the moment from the stage.

The final words from last Friday’s Good Leadership Breakfast speakers, Erik Gabrielson and Moira Petit were pointed and relevant to all: “What fear holds you back?” The roundtable discussion which followed provided amazing insights for the people who shared. Many said rejection, or introspection, and even running out of money was holding them back from being the best person they can be. Most leaders say they fear losing control – of their jobs, their authority and their lives.

The story Erik and Moira shared was their partnership in helping their son Kieran survive a dire diagnosis, and then thrive through the next 9 years of surgeries and complicated healthcare interventions. Born with Congenital Diaphragmatic Hernia – CDH, Kieran was born without the ability to breathe. “My life changed instantly when I saw our child taken from my wife’s abdomen and rushed off into another room where four nurses and surgeons were waiting to keep him alive,” Erik told 220 people attending the breakfast. “I was reduced to an observer, because before the Cesarean Section procedure I signed a whole bunch of papers giving all of my parental decision-making rights to the doctors.” He gave up control, and acknowledged his fear. 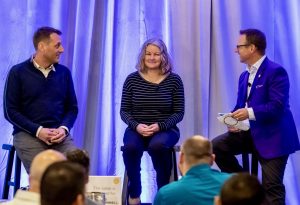 Erik and Moira shared their thoughts about handling more than $1 million in fees associated with Keiran’s infant medical bills. They focused on gratitude.

Erik and Moira shared a wonderful love story about how they partnered with amazingly competent infant care-givers to help Kieran grow through a very small chance of surviving. “For me, the key was letting go. Letting go of my pretenses for what a good parent should be doing. Instead, I had to just learn to love him for what he is today,” shared Moira. “Every day I have to let go of my self-centered fears and focus on what Kieran needs. Sometimes that’s really hard!”

Then one day the nurse said: “Tomorrow Kieran will be going home with you!” They were not prepared! No crib, no supplies, no thought about how to accommodate all of the complexities of an infant who needed extraordinary care and attention. The small army of care-givers left Erik and Moira on their own. More fear. 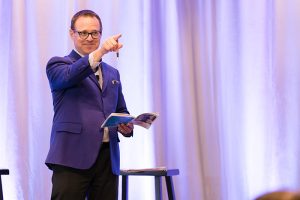 The theme of the day: Nothing Significant Ever Happens Alone. I thanked 33 people who helped make the breakfast happen in March while I was gone.

Today, Kieran is a thriving nine-year-old boy who loves to share the tic-tac-toe board of scars on his abdomen. And Erik and Moira have a riveting story of courage, partnership, love, fear and overwhelming gratitude they are sharing with audiences inside and outside the hospital industry.

The theme for the meeting was: Nothing Significant Ever Happens Alone. Returning from my sabbatical, I echoed their gratitude for all of the people who helped them. Although not nearly as significant, I read the names of 33 people – not including sponsors or ticket holders – who worked together to make the March breakfast happen without me.

Good leaders pull people together to make significant things happen. And they work through their fears by believing in what’s possible, and sharing their gratitude for everyone who helps.

Please share with me: What fears hold you back? 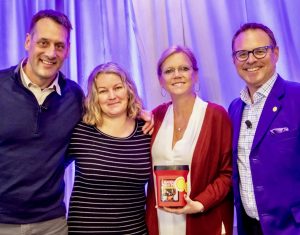 Congratulations to the winner of the Bucket of Good Will winner Linda Dolan, who gave $4514 to the Play for Patrick Foundation.