Good Leaders: Who encourages you to grow? 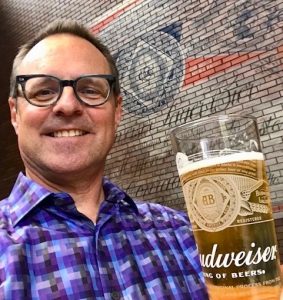 A whirlwind of travel for coaching work concluded with an ice cold Budweiser, on the original brewing site in St. Louis. Thank you Burns & McDonnell for the treat!

Last week was a whirlwind of travel, training, and coaching to spread goodness through good leaders. The week began with a global leadership team in Detroit, comprised of people from three different continents. Their mission is to transform the IT function in a business that needs business transformation to improve financial performance. And to restore pride in the brand. So…it’s not surprising they were interested in the core Goodness Pays idea: when people thrive together.

How we encourage each other to grow

The core idea for improving business performance is to allow the goodness in the room to improve the performance of the leadership teams. When good leaders work together in good teams – that makes great performance possible. We organize all of our work around our research that proves the highest performing teams have these two things in common: 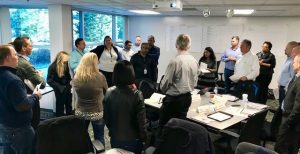 A technology team practiced critical “hand-offs” in a stand-up meeting we facilitated in Detroit.

1. The people involved actually care about each other, both personally and professionally. And because they care:

2. The team builds plans and solve difficult problems together.

A magical moment with the group in Detroit was the testimony from a few of the leaders about how the Seven Fs Wheel improved their personal life, and also improved the relationship capital of the team. That insight came after the team of 20 leaders self-assessed their individual satisfaction on faith, family, finances, fitness, friends, fun, and future. You can get the Seven Fs Wheel here free. 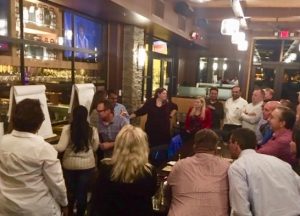 The leaders grew in their friendships with a loud and competitive game of Pictionary, on flip charts in a private dining room. Game Night is always a hit.

The transformational idea is the notion that good leaders learn how to grow on each of the Seven Fs – while on the job, at work! It’s not just a “personal” thing. We proved the point with a team building exercise called “Game Night.” Our coaches organized games of Yahtzee, Heads Up, and Pictionary. The result was laughter, cheers, and an overwhelming support for one another. We debriefed the silliness the following morning, and realized everyone grew last night.

The team in St. Louis was working on their aspirational thinking – it’s the “future” part of the Seven Fs. Our session was in one of the public meeting rooms at the Anheuser Busch brewing company, the original home of Budweiser beer. We used the setting to talk about how their personal aspirations can help improve the aspirational energy of their business. Aspirations are motivational goals that help us overcome resistance, hard-to-break habits, and our tendency for negativity. 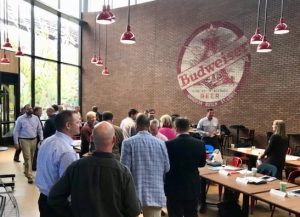 Teams develop appreciation for one another when they play the Bucket List Game, and share their thoughts about “future” on the Seven Fs Wheel.

The fun came alive when we played the Bucket List Game, which comes alive in our book: The Bucket List Book. The group realized the simplest idea: Why would we follow anyone who has a low satisfaction score on “future?”

They capped off their time together with a free-wheeling brainstorm about a Bucket List for their company: “Maybe we can name a stadium after our company some day!?” That’s awesome.

Good leaders embrace the idea that their success is dependent on working together in teams. And they use their aspirations to encourage each other to grow. 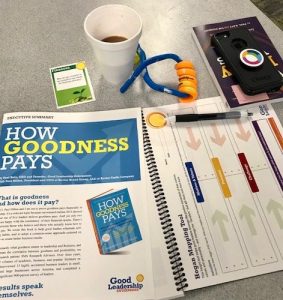 The tools of our trade: coffee, fidgeting toys, and Good Leadership toolkits.