Kevin Burkart is a rock star in his family, and to anyone else who hears his tale.  Motivated by his father’s courageous battle with Parkinson’s disease, he decided to do something spectacular to raise awareness for the dreadful, disabling disease.  So, why not jump out of an airplane 100 times in one day?  He labeled this harrowing feat:  100 Perfect Jumps for Parkinson’s.

Kevin Burkart (the tall one) was a fantastic speaker at the Good Leaderhip Breakfast, March of 2011

By day, Kevin Burkart is the founder and President of The Stepstone Group – a strategic communications company headquartered in the Twin Cities.  Last week, at the Good Leadership Breakfast, Kevin humbly brushed aside promoting his business.  Instead, he shared his heroic skydiving tale with more than 50 community leaders.  Kevin showed a video that chronicled his second event: the 200 Perfect Jumps.  Honestly, this is one of those “you gotta see it to believe it” kinda of things.  A well-orchestrated team of ‘packers’ helped him prepare six parachutes that were used in succession.  His pilot flew up, around, down and stopped as many times as Kevin jumped out.  This go-around, he skydived from the “legal ceiling” 150 times; that’s once approximately every four minutes…all day long!  A couple hundred people stopped by to watch…most left after their necks got sore from peering skyward too much. 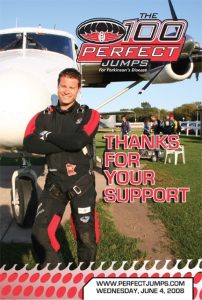 Since the first jump, he’s raised hundreds of thousands of dollars in real cash for Parkinson’s disease research.  But he’s most proud of the millions upon millions of TV, radio and print ‘air time’ he’s garnered to help raise awareness for the cause.  His family, the community, and the recent breakfast-goers are humbled and exceedingly proud that Kevin puts himself out there for the cause.

Oh yeah, and he’s planning for one last hurrah: 300 jumps in 2012.  For more information log onto www.perfectjumps.com to learn more and contribute.

Kevin’s parting words for us was a question:  What can you do to put yourself out there for something you feel strongly about?  Kind of gets you thinking…right?