Richard Leider introduced the idea of “pivot points” that happen in our lives, if we look for the goodness.

When Richard Leider, the internationally-acclaimed expert on “purpose” in life and leadership appeared at the Good Leadership Breakfast in February of 2017, he and I talked about the important pivot points in each of our careers. In the interview portion of his talk, I asked him about some of his most memorable moments when his career pivoted–taking a sudden turn in a new direction. Ever since that interview, I’ve been keenly aware of some of those moments in my life and in the lives of our clients. 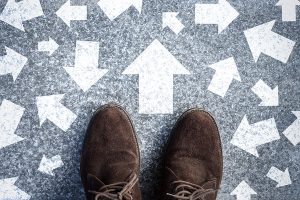 Looking back on your career–what moment did you take a turn in a new direction, that turned out to be good for the direction in your life?

Leider talked about attending a lecture by his idol, the famous Austrian neurologist and psychologist Viktor Frankl, author of Man’s Search for Meaning. Leider credits that one single lecture as the pivot point that launched him on the journey to become the world’s foremost authority on the power of purpose. It was pivotal, because he didn’t expect it.

The coaching question in today’s blog is this: Are you open to a pivot point in your leadership? What sudden turn took you in a new direction that changed your life and leadership?

Where’s the goodness in this?

Yesterday I had coffee with a peer who had a number of sudden changes that seemingly bounced his life and leadership in the wrong direction. An important employee quit on January 2, and his right-hand operational partner left two weeks earlier after 14 years without much warning. He was discouraged, and seeking some coaching.

Not surprisingly, I asked our signature question: Where’s the goodness in this?

Of course, he knew that question was coming–that’s why he invited me to coffee. As we talked through the unexpected benefits of these sudden changes his body language shifted, in a good way. As he sat up straight, his voice got stronger…and then his eyes got brighter. Within 30 minutes he had a new outlook and a sketch of a new plan. 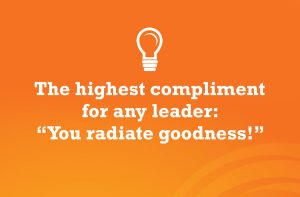 How do pivot points in your leadership provide opportunities to radiate goodness?

As we parted, he said: “I suppose the reason the firm was a little stuck, was because I was a little stuck.” With a grin he concluded, “Now I see how the opportunity to hire new people into new positions will help us leap ahead.” It was a pivot point moment, and he knew it. And he was radiating goodness.

Good leaders often recall how the New Year naturally creates pivot points. And they bounce in a new direction because they left their hearts open to finding the goodness in the change.

Please share with me: When did you find goodness in a sudden change in your life?