Good Leaders: How would you answer the call?

My friend Joseph Otting spoke at the Good Leadership Breakfast in his role as the Comptroller of the Currency, in the U.S. Department of the Treasury.

The Comptroller of the Currency for the United States Treasury, Joseph Otting, was the honored guest at the Good Leadership Breakfast Series this past Friday, October 19. He came to us because he’s a repeat coaching client, someone I consider a friend, and a good leader who radiates goodness.

A full house audience heard a lyrical story of how Joseph learned the habits of hard work cleaning cars at 9 years old in the dealership where his father was employed. That hard-working spirit propelled him through a prosperous 35-year career in banking, where he became the CEO of OneWest Bank in California. And then to Pennsylvania Avenue in Washington D.C. A career move he never saw coming. You can listen to our podcast about him here.

Sometimes it’s Hard to Say ‘No’ 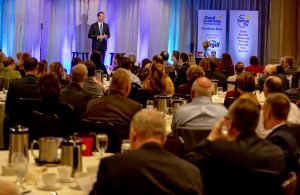 A full house heard how Mr. Otting’s career incuded 35 years in banking, before accepting the call to D.C.

After the bank sold, the compelling part of Otting’s story started. He bought a home and a golf course in Las Vegas and settled into the entrepreneurial life. But then, Washington D.C. came calling. “Most people don’t understand that a transition plan needs to be filed for how the winning candidate will run the government when they are elected,” he explained. “I volunteered to help the republicans fill the roles in the financial offices.” He and his team turned in their plan four days before the election, and he promptly left for home.

When the election results were official, he never intended to take a position in D.C., because he didn’t want to. “It’s easy to say no to [certain people] when you don’t want to do something,” he said. “But it’s much harder to say no when the President of the United States calls you and asks you to serve.” 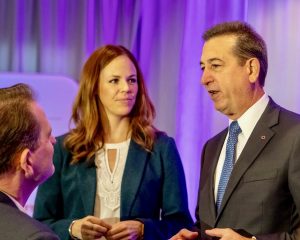 My co-host, Julie McDonough from Bremer Bank, admired the poise and friendliness by which Joseph Otting greeted the Good Leadership Breakfast guests.

Today, he regulates the same industry that gave him a thriving career. “For me, the choice to accept the Comptroller position came down to a sense of duty. I didn’t serve in the military. I worked in the private sector my whole career. When I opened myself up to the idea of working in the Treasury, I saw new opportunities to improve an institution, and an industry that I really admire,” he explained.

To state the obvious, not everyone in the audience last Friday voted the same way. Minnesota is traditionally left-leaning. However, I heard messages of pride from both ends of the political spectrum. One season ticket holder shared her mixed emotions: “I’m generally suspicious of anyone in power in D.C., and I’ve never voted anything but Democrat. But, I feel good that Joseph Otting is our Comptroller.” 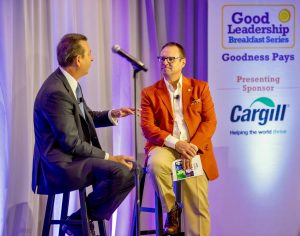 How did I get to be so lucky, with a friend like Joseph Otting?

Personal meaning to me

Once or twice a year, I pinch myself and ask: “How did I get so lucky to know this leader?”

Sitting next to Joseph Otting during the interview segment of the program, he shared his boyish amazement over moments in the White House when he participated in global economic chats with the highest leaders in the land. That’s when I had a hard time concentrating…thinking: “How did I get so lucky?”

Good leaders work hard every step along their journey. And they answer the call to serve in ways that help people thrive.

Please share with me: How would you answer the call?