Good Leaders: When have you shifted your leadership style? 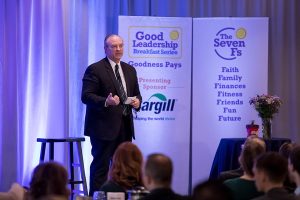 Paul Hillen made us laugh as he shared the evolution of his leadership style and challenged us to think about ours.

Last Friday’s Good Leadership Breakfast featured the most laugh-filled keynote speech I’ve heard in a long time. Paul Hillen, longtime friend of the breakfast and Chief Commercial Officer at JM Swank, teased Vikings fans and alluded to his St. Patty’s-themed boxers…and reflected on how his leadership has evolved over a thirty-year career. You can listen to clips of Paul’s story on the latest episode of the Goodness Pays Leadership Podcast, where I break down his message with Good Leadership writer and producer Chloe Radcliffe. Get your half hour of inspiration today!

Paul grew up as the youngest of seven children, and the “fend for yourself” mentality among his siblings prepared him for a competitive business world. His first job out of college was at Proctor & Gamble, an “up-or-out” culture…and Paul went up. Over fifteen years at P&G, he honed a blunt, pull-no-punches leadership style that matched their aggressive and competitive culture. That style proved difficult in his transition into a leadership role at Cargill. Paul explained: “Cargill and P&G couldn’t have been more opposite. Cargill was consensus-building and ‘Minnesota nice.’ Everything that had helped me become successful at P&G became challenges at Cargill.”

He was faced with a choice: change or leave. Paul’s leaders encouraged him to focus more on consensus-building, but it wasn’t until he was matched with an executive coach that his philosophy transformed. Paul remembers thinking that his executive coach was too “huggy,” and was talking too much about “fluffy stuff,” until he saw that a commitment to goodness in leadership made a difference in his team morale and financial results. Of course, who was Paul Hillen’s executive coach? Paul Batz! 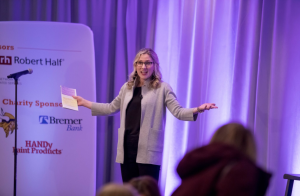 I had a blast filling in this month for Paul Batz as host of the Good Leadership Breakfast.
(Kelsey Meyer-Schalkle)

A sneak peek at the next book from Good Leadership

Paul Hillen told a story of Paul Batz (too many Pauls!) saying: “If you can commit to goodness in leadership, anyone can!” The two Pauls are teaming up on a book called How Goodness Pays, about how good leaders not only earn better work from their teams, but deliver stronger financial results. How Goodness Pays will include qualitative and quantitative research, and Paul Hillen gave a preview of the book’s wisdom, tackling the question “why is common sense not common practice?”

I think that’s exactly the question we need to be asking. It’s so easy to dismiss cornerstones of goodness – fairness, positivity, ethical actions – with “I get it, I get it.” But few of us actually take the steps to change our leadership to reflect those actions…because we’re still acting in the short-term. How Goodness Pays will present data-driven evidence that goodness results in stronger financials in the long-term, and I’m excited for the potential this book has to shift the conversation around goodness in leadership.

Good leaders evolve their actions and philosophies over time to invest in the long-term.

Please share with me: When have you had to shift your leadership style to demonstrate goodness? How has that paid for you?