What is your hero doing today? 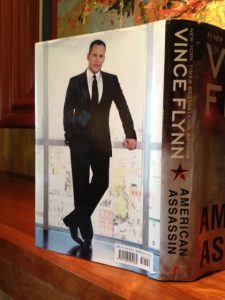 Novelist, Vince Flynn, died peacefully with his family last week at the age of 47. His commitment to God, family and country made him the only hero in my life.

About five years ago I was facilitating a leader-to-leader discussion group about people and events that shaped our collective vision of good leadership. One of the participants surprised me by asking: Who is your hero? The question caught me off guard: I was speechless (a rare moment) because I’d never thought about having a hero. Until a couple of years later when I met internationally acclaimed #1 New York Times Best Selling author, Vince Flynn.

Sadly, last week, Vince Flynn died of prostate cancer.  It was a double gut-punch: just like I heard about the jets crashing into the World Trade Center towers on 9/11, I heard about Vince Flynn passing during rush hour on my car radio. And, he was basically my age: just shy of 50 years old.

He was known as “our guy Vinnie,” because his radio interviews were so compelling and real that common listeners like me considered him a friend. Like millions, I devoured Vince Flynn espionage novels over the past decade. After two days of can’t-put-it-down excitement, I had no other choice but to  start counting down the 363 days until the next book.  His stories were so intense because he wrote about international espionage and counter-terrorism during the post 9/11 era. His insights were so real that President George W. Bush called him to the White House to learn how he got his inside information.

Local radio host, Dan Barreiro (KFAN), introduced me to Vince Flynn — first over the airwaves and then at a book signing event for American Assassin (pictured above.) Vince was big and strong, charismatic and gentle as a baby when he shook my hand. He asked what I did for a living: when I said “Among other things, I write about leadership,” he laughed and said: “Now that’s hard stuff.”

He was my hero because he overcame dyslexia and chronic ridicule on his way to becoming a Herculean novelist.  He tended bar in St. Paul, Minnesota, to make ends meet, while absorbing dozens of publisher rejection letters. With the help of family and friends, he self-published the first novel and the rest is history. Along the way, he lived with uncompromising love for God, family and country — and he modeled excellence, generosity, fairness and positivity.  Goodness!

After his first round of cancer-fighting, he spoke to me over the radio airways: “There is no way I could endure the pain and agony of fighting this type of cancer without my faith, my family and the sense that something is going to be better for me in my future.”

Good leaders make a habit of remembering the moment of impact when they form a real-world connection with a hero.  And they make a promise to uphold that vision of goodness.