Star Trek fans take notice — youngster Brian Smith from Two Harbors, Minnesota is about to become your new hero. At age 32, Brian has just been named to a tenured track position in Physics at Oxford University. That’s a really, really big deal. He’s going to wince when he reads this…because he’s humble, and he’s exacting (in physics, that’s a good thing.) Remember “Beam Me Up Scotty?” (that’s always been my favorite part of Star Trek.) Brian is working on optics transfer — its the kind of thing that will make “Beam Me Up Scotty!” possible.

If that doesn’t impress you, then it should impress Kurt Russell — he was the star in the 1970s Disney movie: The Computer Who Wore Tennis Shoes. Cute, smart, exceptionally nice..and a modern day smarty-pants. That was Russell, and that’s Brian Smith. Brian will be the first one to tell you that he isn’t the smartest person in the room — not even close. However, he’s almost always the smartest Good leader in the room. His people skills are remarkable within the intensely introverted world of Quantum Physics. He can look you in the eye, shake your hand in a Midwestern way and crack a joke that you’ll remember. 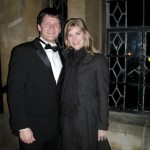 Good leaders are rare. As a Gustavus grad, and the Uncle to his wonderful wife, I’m so pleased to see that the long walk from the streets of Two Harbors, Minnesota to the hallowed grounds of Oxford University is still possible. Especially if you’re still wearing tennis shoes.